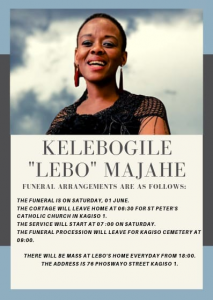 IT IS with great sadness that the Archdiocesan Department of Communications announced the passing on of Lebo wa Majahe, a reporter for Archdiocesan News.

Lebo WA Majahe, widely known and well loved in the Archdiocese, was a bundle of energy, resourceful, determined, a great networker yet fiercely independent and private, almost to a fault, said former ADNews editor, Judy Stockill who mentored her in her journalism career..

“Lebo, Mlebana Majahe as she was when we first met, joined me on the Diocesan News in the very early days of my editorship. There had been no office for the Diocesan News at the old Chancery so by degrees, and squeeze, we settled ourselves in the room with the switchboard equipment which was occasionally used by auditors and, which at one time, had served as a vocations office. Ironic that later Lebo knew and befriended all the seminarians of the Archdiocese.

“Lebo was doing a diploma in journalism when she turned up to volunteer her services for the Diocesan News after having worked in the Youth Department as a volunteer,” said Judy.

Lebo became a well-known feature in most communities, especially in the western areas where she lived.

She grew up in Kagiso and went to school at St Angela’s, Dobsonville.

Besides writing articles for ADNews on a part-time basis, Lebo was very active in assisting Archbishop Buti Tlhagale in his fundraising for The Shrine.

The offices would always be filled with Shrine merchandise which she was trying to sell. She assisted many parishes and sodalities with their fundraising events such as gala dinners, golf days, fun runs and walks.

Lebo was also had a great devotion to Blessed Benedict Daswa and wrote numerous articles about him. She got to know his family and friends well and spent a lot of time in his home town in Thohoyandou.

Fr Emil Blaser, former Vicar of Communications said he was deeply saddened by her passing.

“We worked together as a team with her for many years.”

She is survived by her son Kanu 14 and her mother.